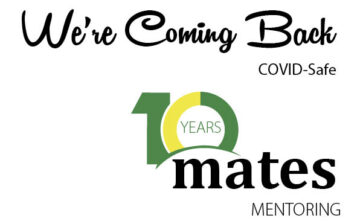 We know from numerous reports and research that the coronavirus disease (COVID-19) has taken a toll on our community, particularly our young people, either directly or indirectly.

Our children and young people have faced unprecedented turmoil and exposure to trauma which has impacted on their overall wellbeing. They’ve experienced a collective of negative events; events that singularly would cause stress and anxiety for most, including loss of employment, social restrictions and having to adapt to remote learning. Our most vulnerable young people have faced even more with an increase in family violence, exposure to alcohol and other drugs, and household financial stress.

A Raise Foundation report estimates that up to 15% of children will experience significant mental health symptoms following exposure to an event such as the COVID-19 pandemic.

MATES Mentoring, now 10 years established, which has been implemented across regional Victoria to support the wellbeing of children and young people, was put into hiatus with COVID-19 restrictions.

WSMLLEN is pleased that the MATES Program will be returning to the Wimmera and Southern Mallee region in a format involving off-campus mentoring which may take place with very detailed protocols to minimise any risk to mentors, mentees and the broader community. In-school (on-campus) mentoring will not operate until further notice.

Mentoring has a valuable role to play in supporting young people in the Wimmera Southern Mallee region and is now more important than ever.

In the coming week, WSMLLEN will be reaching out to current mentors and the broader community to seek support for our young people. We will be hosting a virtual information session on Friday 30th October at 1 pm. Potential volunteers can learn more about the program and the COVID-safe protocols.

Volunteering is Good for Your Health

A quick Google search can find numerous articles and scientific studies that indicate that volunteering is good for our health. This is more particularly so for people over the age of 50.

Some of the health benefits of volunteering include:

Lower Blood Pressure
A study from Carnegie Mellon University in the USA found that adults over 50 who volunteered regularly were less likely to have problems with high blood pressure than non-volunteers. One of the researchers concluded that volunteering might increase the physical activity in people who would otherwise be inactive and this, in turn, could reduce stress and improve heart health.

Better Sleep
The Stony Brook University School of Medicine surveyed more than 4,500 Americans and found that volunteering had an impact on sleep. The survey indicated that volunteers have less trouble sleeping, less anxiety and better friendships and social networks.

Helpers High
Studies have shown that those who volunteer have a similar physical experience to people who exercise vigorously or meditate. This is because the body releases ‘feel-good’ endorphins during positive social contact with others. There was a ‘catch’ associated with achieving this ‘high’. To gain the benefits, the volunteers needed to be involved in direct contact with other people and must be altruistic, without a selfish motivator, like money, being involved.

Numerous articles suggest there are even more benefits to be gained from volunteering which contribute to better health and wellbeing.  Some of these include:

Some of these studies also pointed out that, the health benefits of volunteering were achieved by volunteering for 200 hours per year, (4 hours per week).
Imagine what a difference it would make in our world if everyone over 50 volunteered for 4 hours a week! Not only would our society benefit from the skills and experience being injected into our communities but the volunteers themselves would experience improved health, reducing the burden on our medical system.

People who volunteer do so for a number of reasons. The primary reason is often that they want to make a difference or help others, but it is also OK to gain some benefits for ourselves. Sometimes the satisfaction of knowing that we are helping someone provides sufficient benefit in itself. The additional benefits of volunteering then become an added bonus.

At Wimmera Southern Mallee LLEN we have volunteering opportunities that have the potential to improve the health of our volunteers:

Whether you are over 50 or under, we would love to hear from you if you would like to make a difference in a young person’s life.

‘MATES has the potential to shift the long term trajectory of these young people’s lives.

The outcomes of the program have proven to be profound for all parities involved. Schools report that for students that have participated, there have been evident behaviour improvements; increased connection with schools; stabilised relationships and enhanced life skills amongst may other benefits.’

These were the findings of in independent review of the Mates Mentoring program conducted in 2016.

MATES has been designed as a model which is easy and effective for all schools to implement and this is reflected by the high rate of program uptake. There is no cost to schools to run the program.

While is too early to assess the full extent of the impact that the MATES Mentoring program will have on the long term life outcomes of the program participants, a Social Return on Investment (SROI) study of the Big Brothers Big Sisters program which has been running for over 30 years in Australia and which has similarities to MATES Mentoring has shown a number of important life benefits for program participants when followed up at an average of 37 years.

If the average social return value for the Big Brothers Big Sisters program was applied to MATES Mentoring Program, it could be estimated that the $89,100 investment made into the program between 2013 and 2015 would likely return a social value to the Wimmera Southern Mallee Community in the vicinity of $1.6 million dollars over the next twenty years.

Over the 2013 and 2015 period it is estimated that a total of 6,667 volunteer hours were invested by [MATES] Mentors in mentoring and participating in training. Assuming that one hour of each volunteer’s time is valued at the minimum casual award wage including 25% casual loading of $21.61, it can be directly calculated that the total value of volunteer time of $157,169 has been invested into the program by the Wimmera Southern Mallee Community.

In an earlier survey carried out directly by Wimmera Southern Mallee LLEN to assess the impact and benefits of the MATES Mentoring Model, the LLEN found that of the students surveyed:

Based on the review and the on-going assessments and surveys, MATES is a model with proven return of investment for social impact.  The Wimmera Southern Mallee Community is supporting and improving outcomes of our young people through mentoring.

To get involved and be part of the team that is having this kind of impact, contact WSMLLEN on (03) 5381 0122, email mates co-ordinator, or visit www.llen.com.au/mates.

Volunteering – The Social Impact for Business

Throughout Australia we are seeing a new brand of social responsibility from business that is using employee volunteer programs to ‘invest’ in community and as the key to attract and retain staff, which then feeds into operational efficiency and profitability.

The Wimmera’s business community is pretty savvy; recognising that business is more than just about the bottom line when you work and live in a close community. You see and hear about sponsorship contributions, ‘meals on wheels’ rosters, and a plethora of ‘great ideas’ being supported.

According to Volunteering Australia:

However, businesses are not charities and the general belief is that community-mindedness has to give way to generating profit at some point.

Given the input of volunteering is worth billions to Australia, overcoming the barriers of time and commitment for staff to volunteer is an instant value-add to our community as well as in-house productivity. (Locally, the volunteer hours invested in the MATES Mentoring program from 2010 – 2016 was estimated to be valued at $157,169.)

MATES has been designed as a model which is easy and effective to implement and this is reflected by the high rate of program uptake.

For further information on using MATES as an Employee Volunteer Program, or to enquire about becoming a mentor, please contact mates co-ordinator, visit www.llen.com.au/mates,
or call (03) 5381 0122.